It’s a so-so thriller built on a historical curiosity. In the 1930s, the Augusta Victoria College was a finishing school for young German women in the English seaside town of Bexhill-on-Sea. Izzard knew it as a child. His story involves spies and counterspies at the school in the days immediately before World War II. He plays an English teacher who’s brought in after his predecessor is killed. Dame Judi Dench is the head mistress.

Suspense films are seldom logical or realistic, and this one is more disjointed than most. But it does contain one unusual sequence that surprised and delighted me.

Izzard’s character is on the run from the police. He is also in need of clothing. As luck would have it, a marching band is taking a break nearby and a horn player has left his jacket and hat unguarded. Our hero filches the garments. The moment he puts them on, he is transformed into the late great comedian Benny Hill as one of his most recognizable characters.

Given Izzard’s background in the field and his facial resemblance to Hill, I cannot believe this is accidental or coincidental. In the film Izzard never breaks character or cracks a joke, but the similarity is too strong to miss. Until someone denies it, I will take Izzard’s choices to be an homage, an affectionate tip of the hat from one comedian to another. That’s Benny on the left below. 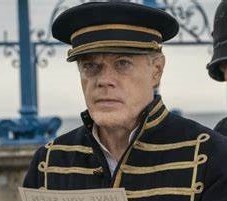